Help athletes of all abilities get to the starting line 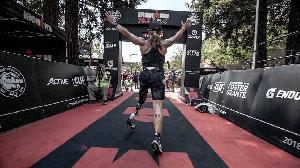 I’m #IronSarah. In 2005, I became the first female amputee to complete the IRONMAN World Championships in Kona on a prosthetic leg.

I’ve crossed hundreds of finish lines around the world. But what excites me most is working with partners like the Challenged Athletes Foundation, Össur and Nike to help athletes of all abilities get to the starting line.

In celebration of the 40th anniversary of IRONMAN, I'm heading back to the IRONMAN World Championships in Kona for the first time since 2005. On October 13th, I will be lining up at the starting line of what is likely to be my last IRONMAN and I want to make the journey as meaningful as possible.

Which is why, in honor of the 40th anniversary of IRONMAN (and the 25th anniversary of CAF!), I’ve set a goal of raising $40,000 for the Challenged Athletes Foundation to help athletes of all abilities get to the starting line.

Thanks to CAF, I've had the opportunity to compete at the highest level of my sport. More importantly, I've been able to mentor the next generation of athletes, so the movement CAF started 25 years ago continues to grow.

Thank you for helping transform more lives through sport.